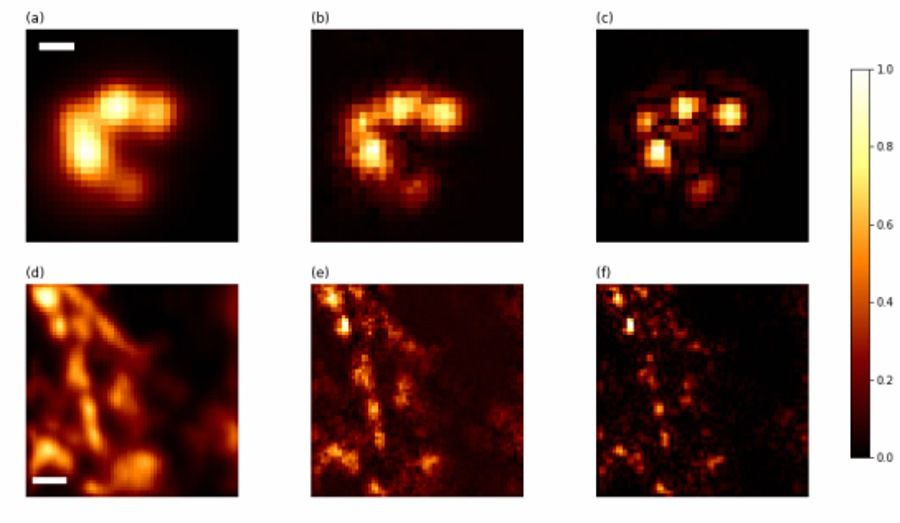 Researchers from the University of Warsaw’s Department of Physics, together with colleagues from the Weizmann Institute of Science in Israel, demonstrated a new microscopy method – Quantum Image Scanning Microscopy. The method uses the quantum properties of fluorescence light to image biological samples.

The method, developed by a Polish-Israeli teamoł Quantum Image Scanning Microscopy (Q-ISM) method significantly improves the resolution of the images obtainedoinoCompared to standard methods. Q-ISM is based on dwoch already known microscopy techniques and combines their advantages. The results of the team of researchers were published on the „Nature Photonics”.

Microscope is one of the basic tools of researchers involved in life sciences. Enables creation of magnified imagesoin the analyzed objectsow. But the scientistsow are often interested in extremely small objects, smaller than a micrometer, and this is a challenge for standard microscopesow.

„The resolution of the classical microscope is limited – objects that are closer than half the wavelength of light (approx. 250 nm for green light) are no longer rozroharvestable. One of the basic microscopic techniques used in the life sciences is fluorescence microscopy. It uses special markers, such as green fluorescent protein (GFP), for which theorego discovery and research was awarded the 2008 Nobel Prize in Chemistry. Using the markeroin fluorescence allows to observe only the interesting parts of the studied object. As it turns out, skillful use of the properties of the traceroin fluorescent light also allows to surpass the resolution limitations of classical microscopy, for which roAlso awarded the Nobel Prize in Chemistry in 2014” – reads a press release on the website of the Faculty of Physics of the University of Warsaw (FUW).

The limited resolution of an optical microscope is due to diffraction limitations, but there are now many techniques to bypass them. One such method is confocal microscopy, whichorej image is created by scanning the object and recording the intensities at each scan point with a detector without spatial resolution (e.g. 1 camera pixel). By reducing the detector size, resolution can be improved at the expense of the amount of recorded light, in practice achieving a resolution of approx. 1.5 times larger than in a classical microscope.

„The confocal microscope can be modified by replacing a single detector with multiple small-size detectorsow. This results in multiple images shifted relative to each otherow with higher resolution, ktore then superimposed. This method, called Image Scanning Microscopy (ISM), allows higher resolution images to be obtained without unnecessary signal loss, unlike confocal microscopy, in which theohe improved resolution is achieved at the expense of signal level” – we learn from FUW information.

The aforementioned fluorescent tracers treated with krotic flash of light can emit only one photon. This results in antigrouping of photonow (photon antibunching). This quantum mechanical effect is the basis of quantum correlation microscopy, whichoIntuitively, it can be understood as the detection of missing (relative to classical light) pairs of photonsoat a given point. Pair detection can be treated similarly to single photon detection with twice the wavelength, resulting in twice the spatial resolution.

In the publication, researchers cfown, among other things, the spatial resolution of ISM and Q-ISM methods, demonstrated an improvement in resolution by a factor of 1.3 and 1.8, respectively, over standard wide-field microscopy.

According to the study authors, this is the first use of the quantum properties of fluorescence light for imaging probek biologicals. Combining the high resolution of Q-ISM with the high signal-to-noise ratio of standard ISM could lead to an imaging method far beyond the capabilities of either technique alone.